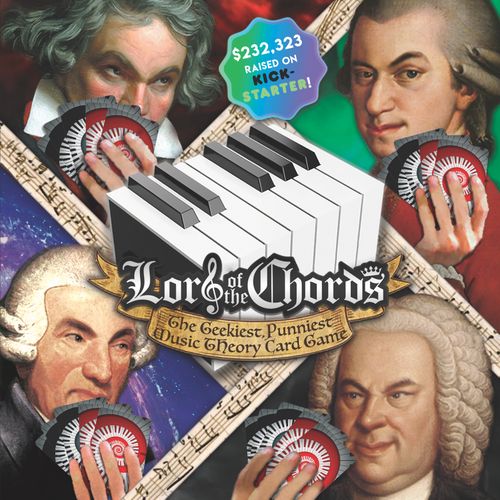 Players begin by choosing 1 of 13 musical instruments that grant variable player powers. To win the game, players must draft the right Note cards to their hands, according to the active Key Signature tile. Notes are then played to the field, and combined to form Chords. When a Chord that matches the current Key Signature is completed by a player, that Key Signature Tile is claimed! The first Player to collect 3 Key Signatures is the Bringer of Harmony, the Destroyer of Dissonance, the Lord of the Chords!

On your turn, you first draft 3 cards, then make 3 moves. You may spend your moves by (1) playing a Note card, or (2) playing an Action card.

Other ways to spend moves include: (A) Moving a Note card from one chord to another, (B) buying Accidental Tokens, or (C) spending 2 moves to draft 1 additional card.

Accidental Tokens make it easier to complete chords. They are placed on Note cards to raise or lower the note by a semitone/half step, depending on whether the sharp or flat side is facing up, respectively. Accidental tokens are bought by selling a dotted quarter note/dotted crotchet worth of Note cards.

All cards are drafted from a pool of 6 cards, so memory, prediction and counter-strategizing are key to victory. Every play is noteworthy - you can’t miss a beat!

The player who most recently practiced music goes first, so go practice!

—description from the designer